Finally! After two tanka without translation notes, this one does, and with two relatively lengthy paragraphs too wheeeeeeeeeeeeeee but first, introduction of the poet!

Counselor Otomo was active during the Nara period as a Japanese statesman and prominent waka poet.  Although he never quite made it to the level of becoming a god of poetry, his skills did qualify him as a member of the Thirty-six Poetry Immortals (三十六歌仙), being proficient at not only writing poetry, but also transcribing, rewriting and refashioning ancient poems and folklore.  Otomo was the most prolific and prominent writer of his time, and as a result was one of the compilers of the Man’yōshū, the first Japanese poetry anthology created, and had a great influence on the Shika Wakashū, an imperial waka anthology.

So.  Moving on to the actual tanka…

According to the notes, the bridge that the magpie crosses could be symbolic of the night sky, as the black-and-white colours of a magpie is reminiscent of the streamers of stars trailing across the night sky.  Another reference to the night sky could be the white frost, which could symbolise the swirls of star dust between the clusters of the stars.

Supposedly, another layer of meaning to the tanka is to view the magpies as representations for Japanese people secretly meeting their lovers on a lonely bridge during the night, white frost building up as the night grows old.  Since this mode of communication was apparently very very common in the Japanese aristocracy, Otomo probably wrote it with both meanings in mind.

And it could be true, since the legend for the tanabata festival is based on the meeting of two separated lovers, who can only meet once a year from their exile on opposite sides of the world, with the road between them a bridge of flying magpies.  That explains both the magpies as an arc in the sky and looking like the stars of the Milky Way, and as a symbol of the secret meetings between lovers during the deep hours of the night.  However, since tanabata is traditionally celebrated in July, which is summer in Japan, I wonder what inspired Otomo to reference this legend in the depths of winter, as snow heaped along the shores and across bridges… 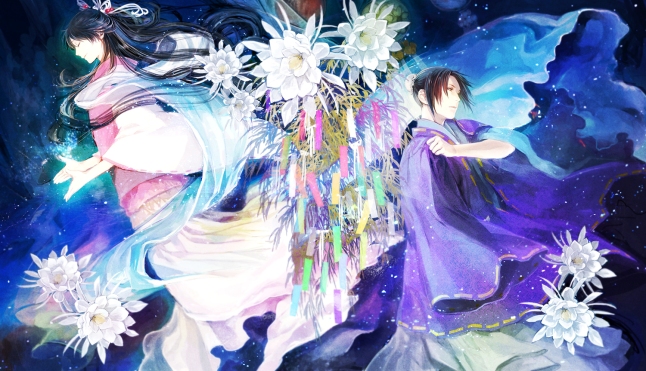