Ono no Takamura was known as a noted poet and a state counselor in the early Heian period.  After a quarrel with the envoy he was supposed to join to go to China, he feigned illness to avoid the mission, and thus received two years’ worth of banishment to an island in then-Oki province (now Oki district in Shimane prefecture).  His departure for his banishment inspired him to write this tanka as he set to depart to his temporary home. 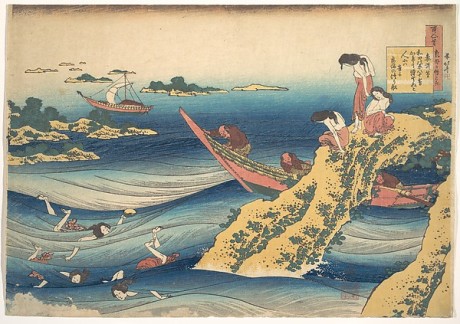 For this tanka, the Eighty Islands is representative of the islands of Japan.  And since the emperor is believed to have descended from the gods in Japanese mythology, the ‘heaven’ in the last line of the translation, I believe, is a symbol for the emperor, who Takamura had ‘tempted’ by defying his orders regarding the mission to China.  Furthermore, I think the ‘people’ in the second last line literally means more the ‘people of the sea’, or fishermen, since he would have seen many as his boat sailed away from the Japanese mainland.  However, the ‘people’ could also denote the Japanese population in general, which would make the last two lines mean for the ‘people of the water’ to tell the ‘people’ of his transgressions and his punishment of exile.

This directive to spread the word of Takamura’s exile as he sails onto the ‘plains of the sea’ could be a call for the people not to forget his name, since he would have had no idea of how long his banishment was to last.  It could also be to serve a warning to others of the result of disobeying the emperor, or it could be a call of regret for his actions.  Personally, the tone of this tanka seemed more hopeful and assertive when I first read it, and so I think that it is a call for people to not forget him because he’ll be back.

Compared to the previous few poems, there are not very many deeper meanings to ‘Tell the People’, but that is good too.  I mean, it’s not like people only went around lamenting their fates and their feelings in thirty-one syllables (although it seems like it, with the amount of deep and meaningful tanka present in this representative anthology of a hundred such poems…).

Also, tangent.  But I really don’t like the new format for writing posts.  When I have to add pictures or add links, I have to keep scrolling back up to the top, and ain’t nobody got time for that.