Henjou was born Yoshimine no Munesada, the eighth son of Dainagon Yoshimine no Yasuyo, a son of the Emperor Kammu who was relegated to civilian life.  Henjou actually started as a courtier, and even became the Japanese equivalent of a chamberlain to Emperor Nimmyo.  However, after Emperor Nimmyo died, Henjou became a monk and priest of the Tendai school of Buddhism out of grief.  After he became a monk, he founded Gangyō-ji in southern Kyoto, stayed active in politics, and was later also given Unrin-in in northern Kyoto to manage.  He is rumoured to have had an affair with Ono no Komachi (poet of #9), and had a son who composed #21 of the HI. 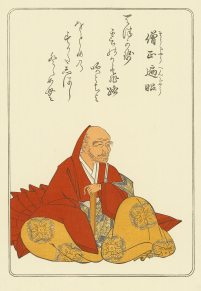 For this particular tanka, my translation states that apparently Henjou wrote this after seeing young ladies dance at a festival, which he therefore referenced as Buddhist mythological maidens living in the sky.  An alternate translation changes the sentences’ structures around, so that it reads:

Let the winds of heaven
Blow through the paths among the clouds
And close their gates.
Then for a while I could detain
These messengers in maiden form.

Originally, I thought that Monk Henjou was asking the winds to help stop the clouds so that he could stay outdoors and observe the maiden that he had seen.  However, this other translation shows that he wanted the winds to close up the sky with clouds so that these maiden messengers would stay with him for longer.  This also makes the Buddhist mythological maiden remark from my translation make more sense, and to me, this tanka echoes a meaning that previous tanka had also displayed: the expression of the emotions of the present moment and the significance of the now (for example, #1, #3, #4, #5, #7, #8).  Henjou is capturing a moment that he finds beautiful, and he knows this moment will not last, but he wishes for this moment to last longer. 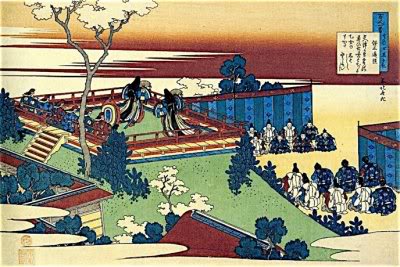 This knowledge of the fleeting moment reflects the beauty of what Japanese call wabi-sabi, or the beauty of the imperfect, of the transient.  It is reflected in how sakura blossoms and the autumn colours are so loved due to their impermanence, in how nature is shaped within Japanese gardens to reflect the passing of time, and in how most Japanese traditional arts such as Noh and the tea ceremony calls for inhabiting a moment through ritual and stillness.  Although Monk Henjou probably wanted to just capture a moment, the way in which he has done so shows more depth into his culture than he probably intended.  Or maybe I’m reading too much into thirty-seven syllables.