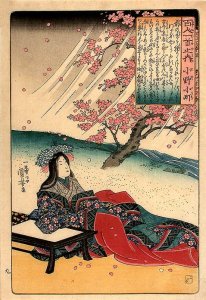 Ono no Komachi was a legendary beauty, famous for both her poetic prowess and her relationships and loves with different men.  She is a member of the Rokkasen (of which Monk Hisen is also a member) and counted within the Thirty-Six Poetry Immortals.  Despite her renown, almost nothing certain is known about her apart from her poetry and within her poetry, the names of the men she was romantically linked with because they are immortalised within the poetry exchanges present in the Kokin Wakashu (or more commonly referred to as Kokinshu).  There are five categories of legends surrounding Komachi, including:

Within her works, almost all her waka are melancholic, layered with verbal complexity and imagery, and almost always are about anxiety, solitude or passionate love.  For this particular tanka, according to my translation, all three of these emotions are represented. 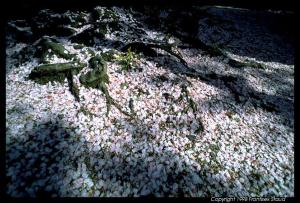 In the first line, the colour of the flower (usually assumed to be sakura) could be representing love or have romantic overtones.  In the third line, ‘vain’ can be translated also as ‘on the surface’, which could mean that the author has wasted her life, or if it is treated as a modifier for the next two lines, means that she (as the world) has grown old on the surface and lost her appeal, but inside she is still full of passion.  The fifth line means either ‘gazing’ or an abbreviation of ‘long rain’, and if we choose to read it as ‘long rain’, the world ‘old’ in the previous line would change to become ‘falling’, and the last two lines would now mean ‘falling long rain’. The many double meanings in this tanka therefore creates so many different readings.  We can take it at face value, which would mean a lady staring at a fading flower in the rain as autumn and winter ages the world, or a lady staring at herself and lamenting the gradual loss of her beauty as she ages, or a lady, still staring at herself, but recognising that whilst she is fading away outwardly, her passion is still burning strongly inside.

I personally rather like taking the meaning as the third one, because that is the reading that encompasses the three dominant emotions within Komachi’s works.  The anxiety of growing old and becoming lonely, the solitude as she contemplates her feelings and the raining world around her, and the passionate love that she knows she is still capable of, this is what I imagine someone of her status and renown would feel as they become older and their looks fade.  This is also the way I hope I age in the distant future, because you cannot help aging, but if you can own it and look past it and recognise that you are still capable of doing great things regardless of age, then you will always be free of the fetters of old age. 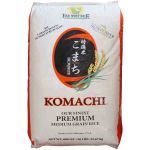 Besides, Komachi has been immortalised everywhere in Japan, including Noh plays, a brand of rice, a train line, and a regular play.  If I follow her example, maybe I too could at least have a shot at being remembered through rice.